Do’s and Don’ts of Disciple Making

Before you dive into making disciples in your church, let me encourage you with a few Do’s and Don’ts. Often pastors, in their zeal to make disciples, inadvertently do things that actually make it harder for them to do so effectively. So here are some practical warnings.

Don’t start casting vision about disciple making immediately. Do start making disciples immediately. Probably the biggest mistake pastors make in disciple making is they reveal their vision and passion for making disciples too quickly and then turn it into a church program that usually has a short shelf life. There will be a time for vision casting and preaching on disciple making, but not at the very beginning. Instead, keep vision casting one on one. Look for a man to disciple and start investing in his life. Help him to reproduce and do the same. Work under the radar. That is what Jesus did. For the first year and half, Jesus didn’t preach to massive crowds, casting his vision of disciple making. Initially John the Baptist drew the crowds, Jesus was content to work in the shadows. He worked under the radar of John’s public ministry, quietly investing in five men. When the time came for him to go public, he already had men ready to begin reproducing. Jesus said the Kingdom of God is like a bit of leaven that silently and invisibly works through the whole dough (Matthew 13.33). So don’t begin from the pulpit, begin at the coffee shop. Start quietly investing in men. You may ask, “Why is this important?” First, it allows you to field-test your methods to discover what works best for you. You don’t want to take something church wide that won’t work in your context. Second, it allows you to build a tribe of supporters. Once you go public with your vision of disciple making, you will have people who can attest to the power of it and how their lives have been changed. Any naysayers will be outnumbered. Third, once you begin to publicly speak about disciple making, people will want to be discipled. If you start quietly making disciples first,  when the demand is there, you will have people ready to meet that demand and disciple the people in your church.

Don’t turn disciple-making over to another staff person. Do lead the charge yourself. The quickest way to kill a disciple making movement in your church is to relegate it to another staff member while you fail to get involved. Remember, disciple making is 90% modeling what the Christian life looks like to other men. You must set the pace yourself. Your actions speak louder than your words. I know many pastors who can preach heartfelt, amazing sermons on discipleship. I know pastors who have written powerful best-selling books on discipleship. But the problem is, they don’t do it. The minute people hear you saying one thing but see you doing another, you lose their heart and their trust. Pastor, hear me. You must give yourself to investing in the men in your church. Make disciples. Live authentically before them. Give them an example to follow. Walk with God on your own and share what God is speaking to you. Build relationships with men who don’t know Christ and regularly share the gospel with them. Have a few men you are investing in on a regular basis. When the men in your church start seeing you do these things, they will follow you! Don’t turn this into a program that will eventually die. Don’t give this responsibility over to someone else. You set the pace and model for your men what it means to know Christ and invest in others. If you will lead by example, they will follow you anywhere.

Don’t do a mass sign up. Do select the people yourself. Some pastors want to preach on discipleship and then say, “If you want to be discipled, sign up at the info desk.” This way he makes the appeal to everyone. But this strategy has some problems. First, that is not how Jesus did it. When it came to training men, Jesus always took the initiative (Matthew 4.18-19). Mark 3.13 reports that Jesus “called to him those whom he desired.” Jesus picked the guys he wanted to spend time with. Jesus always looked for the men who were spiritually curious. The first men Jesus discipled were men who came after Jesus with spiritual questions (John 1.39). I have found that the best person to disciple is not the man who thinks he already knows everything. It’s the man who is hungry, eager, and ready to learn. That is the kind of person you want to disciple. Second, if you get one hundred people wanting to be discipled, there is no way you can personally do everyone yourself. Unless you have prepared a group first, that plan is going to fail fast. Third, you want to be sure that the people you initially invest in have the capability of reproducing. Not everyone is ready for this phase. You wouldn’t want to invest a large amount of your time in a person who will never take what you have shown them and invest in others. Better to do what Jesus did, select the ones that are ready and that will be most productive.

Don’t underestimate the power of a few men who walk with God. Do prioritize reaching and training men. The story is often told about when Dawson Trotman, the founder of The Navigators, was recruiting counselors for one of Billy Graham’s Crusades in a large city. He called supporting churches asking them for help. He asked one secretary who answered the phone if they had many men or women in their church who knew their Bibles well and could lead someone to Christ. She replied, “Would you repeat the qualifications again, please?” So Dawson did. After a long pause, the secretary replied, “You know we did have a man like that in our church once, but he moved away.” Unfortunately, I’m sure that church is not the exception. Does your church have a list of men who know their Bibles and can lead someone to Christ? A list of men who are trained, proven, solid, and ready at a moment’s call? There is a crying need for men like this. Think about it. If a man is walking with God, chances are good he will lead his wife and children to walk with God. Reach the man, reach the family. The man will provide spiritual leadership in his home, at his office, and in the church. For generations, God has used godly women to give leadership to the church. If it weren’t for godly women, like those who invested in young Timothy’s life (2 Timothy 1.5) the church would not be as strong as it is today. However, over time men have taken a back seat in spiritual leadership both in the home and at the church. A 2002 Gallup poll revealed, “A mountain of Gallup survey data attests to the idea that women are more religious than men, hold their beliefs more firmly, practice their faith more consistently, and work more vigorously for the congregation.” Today, the typical church in America draws a crowd that is 61% female and 39% male. On any given Sunday in America, there are 13 million more women than men in church. But when pastors and leaders begin to invest in men, then men begin to step into the roles of leadership they have long since abandoned.

When God gets ahold of man’s heart, there is a generational impact. That’s why the last prophecy in the Old Testament is a promise that before the Lord comes, he will “turn the hearts of fathers to their children and the hearts of children to their fathers” (Malachi 4.6). Don’t underestimate the power of godly men. 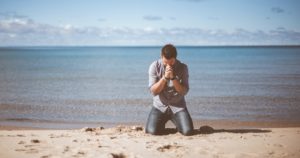 Is Fear Holding You Back?

Are you prepared to make bold moves?